I always find it interesting how things come in waves in so many areas of life. My executive coaching business is certainly included in that. Recently, there has been a wave for me related to KPI s (Key Performance Indicators).  Several of the executive teams we work with are significantly upping their game and have everyone aligned around corporate and individual KPI s.

In early September we were with one of our corporate clients for their quarterly updating of their One Page Strategic Plan.  This company had struggled with joint accountability and follow through in the last quarter.  To begin our September session, the CEO himself acknowledged to his team that he had faltered. He had not followed through fully on his quarterly KPI s over the summer months.  We ended up spending approximately half of our day really drilling down to get these KPI s right for the next quarter.  By the end of the meeting, I realized we needed to assign a bit of a bold action step. We needed to ensure every team member understood how critical it was that each person follow through.

Consequently, our instructions for the entire team were to, within one week, post from their ceiling a note card that would dangle on a string down to their desk. As such, it would sit right in front of their face while looking at the their computer screen.  On the card they were to write their own individual KPI s for the next quarter. By doing so, they had these KPI s front and center at all times.  Every time they sat at their desk the KPI s would be noticed. Hence, every time someone entered their office the KPI s would be noticed.  We were not going to let the KPI s be forgotten this quarter. 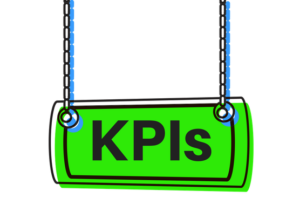 A couple of weeks later I happened to be in the city of their corporate office again. I scheduled to drop in late in the day for a coaching session with one of the senior team members.  I thoroughly enjoyed walking around the office and taking pictures of the various KPI signs hanging from the ceiling in the most annoying way possible.

What the team didn’t realize at the time I had given this assignment was that it actually had little to do with having them “remember” their KPI s.  Certainly this would help in that but the main reason I had them do this was to create discipline, accountability and alignment.  It would be easy for one or more of the team members to react to this suggestion with a, “that’s silly…I don’t need a stupid piece of paper hanging from my ceiling.”  It made me reflect on how often a coach of mine has asked me to do something I don’t feel like doing.  Sometimes we need to do things we don’t want to. It creates discipline, forms healthier habits and, in addition, develops stronger skills.

At the end of the day, what I really wanted to influence for this team was greater alignment and accountability. They had been struggling to achieve this in the past. While in their office on my visit, I heard a story about a new hire to the company who had been asking questions about why the executive was hanging these note cards in front of their faces in their offices.  When it was explained to him, he responded, “Can I have some KPI s to hang at my desk too?”  When we create accountability in our workplace it actually begins to influence a culture shift throughout the workplace.

The business of creating a high performance culture