Just this week, I met with a long-time client who is amid a change of employers.   This is a man who I consider to be a strong and effective leader.  His career transition has him leaving an international firm to head over to a Western Canadian company where he’ll lead in a similar role.  Several weeks ago, this leader emailed me to tell me about the coming change.  He requested a couple of sessions with me. These sessions were to focus on the topic of leaving well and starting strong.  It was important to him to leave his current role on a high note and start his new gig ready to hit the ground running.  To his credit, he decided to take a week off in between roles. He used this time to rest, get his bearings, and be ready for go time.

Prior to his last week with his existing company, we talked about what it looks like to leave well.  He reflected on a number of aspects of this. What resonated most for him was that he wanted to focus on relationships.  Over the last month or so, since the announcement of his departure, several colleagues approached him. They shared with them their appreciation for the way in which he had treated and handled them over almost 10 years of working together.  My client was dumbfounded. He had not known that he had made such an impact on the folks he had supervised over the last several years.  He learned through this the power of those 3-minute conversations with people that he undertook over many years.

Given this, he decided that the most important thing in leaving well would be the conversations he would have in his last week.  In my most recent session with him, he reflected on his last week and indicated it was the best week of work he had ever experienced.  When we processed this together, he indicated it was all about intentionality in how he interacted with his staff, his supervisor and his co-workers.

Our coaching session this week focused on starting strong, as my client begins his new role next week.  As we coached on this, the theme that continued to emerge was that of intentionality.  In addition to planned intentionality in building good relationships right from the start, he identified four key things: 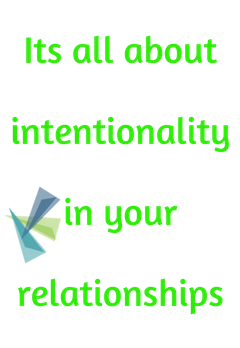 This client has become convinced that for him to be fully alive and to show up ready to deliver at the highest possible level, these are the things he needs to be intentional with.  Witnessing the boldness and the confidence that my client portrayed from the place of being with his intentionality was inspiring to me.  It was a huge gift to me to have this client say he has never been so alive and excited in his life. He felt like he wanted to shout it out to the world.

Cameron is an Executive Coach and Consultant specializing in business growth and workplace mental health.